The World Is Still Short of Everything. Get Used to It.

Pandemic-related product shortages — from computer chips to construction materials — were supposed to be resolved by now. Instead, the world has gained a lesson in the ripple effects of disruption.

Header image: Kirsten Gjesdal stopped ordering some products for her kitchen supply store in Brookings, S.D., tired of telling customers that she didn’t know when the items would arrive. Credit...Tim Gruber for The New York Times

Like most people in the developed world, Kirsten Gjesdal had long taken for granted her ability to order whatever she needed and then watch the goods arrive, without any thought about the factories, container ships and trucks involved in delivery.

At her kitchen supply store in Brookings, S.D., Ms. Gjesdal has given up stocking place mats, having wearied of telling customers that she can only guess when more will come. She recently received a pot lid she had purchased eight months earlier. She has grown accustomed to paying surcharges to cover the soaring shipping costs of the goods she buys. She has already placed orders for Christmas items like wreaths and baking pans.

“It’s nuts,” she said. “It’s definitely not getting back to normal.”

The challenges confronting Ms. Gjesdal’s shop, Carrot Seed Kitchen, are a testament to the breadth and persistence of the chaos roiling the global economy, as manufacturers and the shipping industry contend with an unrelenting pandemic.

Delays, product shortages and rising costs continue to bedevil businesses large and small. And consumers are confronted with an experience once rare in modern times: no stock available, and no idea when it will come in.

In the face of an enduring shortage of computer chips, Toyota announced this month that it would slash its global production of cars by 40 percent. Factories around the world are limiting operations — despite powerful demand for their wares — because they cannot buy metal parts, plastics and raw materials. Construction companies are paying more for paint, lumber and hardware, while waiting weeks and sometimes months to receive what they need. 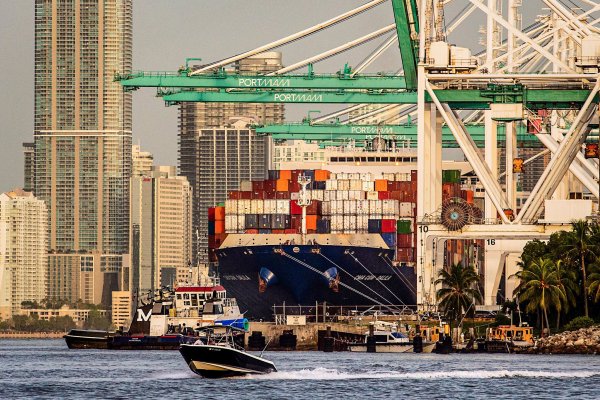 A container ship in Port Miami this month. Shipping is at the center of what has gone awry in the global economy. Credit...Scott McIntyre for The New York Times

In Britain, the National Health Service recently advised that it must delay some blood tests because of a shortage of needed gear. A recent survey by the Confederation of British Industry found the worst shortages of parts in the history of the index, which started in 1977.

The Great Supply Chain Disruption is a central element of the extraordinary uncertainty that continues to frame economic prospects worldwide. If the shortages persist well into next year, that could advance rising prices on a range of commodities. As central banks from the United States to Australia debate the appropriate level of concern about inflation, they must consider a question none can answer with full confidence: Are the shortages and delays merely temporary mishaps accompanying the resumption of business, or something more insidious that could last well into next year?

“There is a genuine uncertainty here,” said Adam S. Posen, a former member of the Bank of England’s monetary policy committee and now the president of the Peterson Institute for International Economics in Washington. Normalcy might be “another year or two” away, he added.

In March, as global shipping prices spiked and as many goods became scarce, conventional wisdom had it that the trouble was largely the result of a surplus of orders reflecting extraordinary shifts in demand. Consumers in the United States and other wealthy countries had taken pandemic lockdowns as the impetus to add gaming consoles and exercise bikes to their homes, swamping the shipping industry with cargo, and exhausting the supplies of many components. After a few months, many assumed, factories would catch up with demand, and ships would work through the backlog. 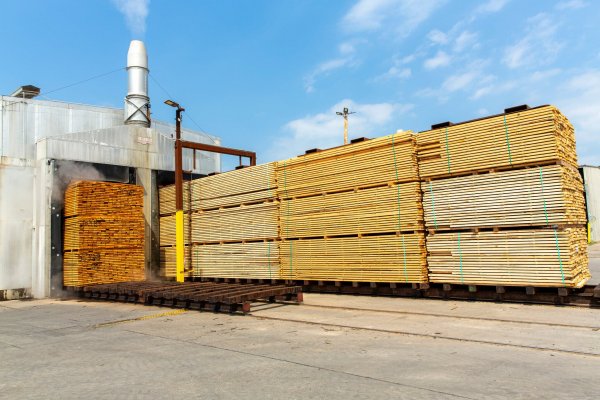 Construction companies are paying more for lumber and hardware, while waiting weeks and sometimes months to receive what they need. Credit...Karen E. Segrave for The New York Times

That is not what happened.

Just as the health crisis has proved stubborn and unpredictable, the turmoil in international commerce has gone on longer than many expected because shortages and delays in some products have made it impossible to make others.

At the same time, many companies had slashed their inventories in recent years, embracing lean production to cut costs and boost profits. That left minimal margin for error.

A giant ship that became lodged in the Suez Canal this year, halting traffic on a vital waterway linking Europe to Asia for a week, added to the mayhem on the seas. So did a series of temporary coronavirus-related closures of key ports in China.

The world has gained a painful lesson in how interconnected economies are across vast distances, with delay and shortages in any one place rippling out nearly everywhere.

An unexpected jump in orders for televisions in Canada or Japan exacerbates the shortage of computer chips, forcing auto manufacturers to slow production lines from South Korea to Germany to Brazil.

“There is no end in sight,” said Alan Holland, chief executive of Keelvar, a company based in Cork, Ireland, that makes software used to manage supply chains. “Everybody should be assuming we are going to have an extended period of disruptions.” 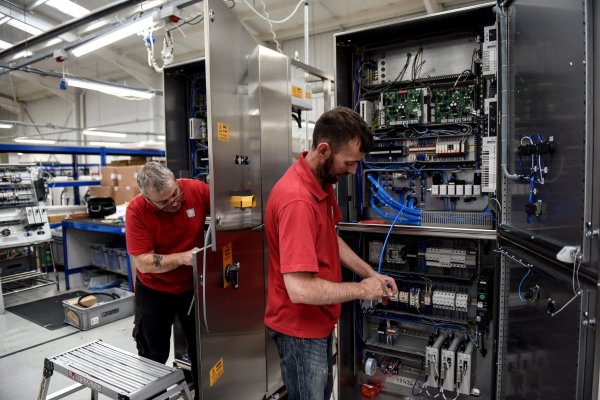 PP Control & Automation designs and builds systems for companies that make machinery for a wide range of industries. Credit...Mary Turner for The New York Times

In the West Midlands of England, Tony Hague has tired of trying to predict when the madness will end.

His company, PP Control & Automation, designs and builds systems for companies that make machinery used in a range of industries, from food processing to power generation. Demand for his products is expanding, and his roughly 240 employees have been working at full capacity. Still, he is contending with shortages.

One customer in England that makes machines to seal packaged food has been hobbled by its inability to secure needed parts. Its supplier in Japan used to take four to six weeks to deliver key devices; now it takes half a year. The Japanese factory has struggled to secure its own electrical components, most of them produced in Asia and using computer chips. Auto manufacturers’ desperation to secure chips has made those components harder to obtain.

“It’s definitely getting worse,” Mr. Hague said. “It hasn’t bottomed out yet.”

For the global economy, shipping is at the center of the explanation for what has gone awry.

As Americans enduring lockdowns filled basements with treadmills and kitchens with mixers, they generated extra demand for Chinese-made factory goods. At the same time, millions of shipping containers — the building blocks of sea cargo — were scattered around the globe, used to deliver protective equipment like face masks.

The container shortages were exacerbated by delays in unloading cargo at American ports, because workers stayed home to slow the pandemic’s spread.

Then, in late March, came the fiasco in the Suez Canal, the pathway for about 12 percent of the world’s trade. With hundreds of other ships blocked, the impact played out for months.

In May, China shut down a huge container port near Shenzhen — one of the nation’s leading industrial cities — after a small outbreak of a coronavirus variant. The port did not resume operations for several weeks.

Then, in the middle of August, Chinese authorities shut down a container terminal near the city of Ningbo after one employee tested positive. Ningbo is the world’s third-largest container port, so its closure held the potential to snowball into a global event, even threatening the supply of goods to American stores in time for Black Friday sales around Thanksgiving.

By Wednesday, the Ningbo terminal was back in operation. But China’s decision to close it because of a single Covid case resonated as a warning that the government might shut other ports. 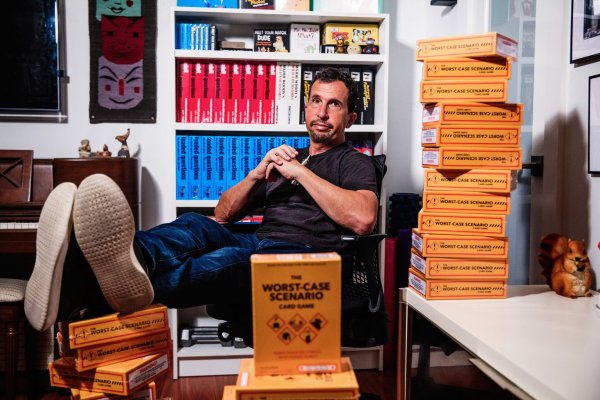 Eric Poses has seen international shipping costs for his board games soar, from $6,000 to $7,000 before the pandemic to $26,000 now, and they are expected to go even higher. Credit...Scott McIntyre for The New York Times

In Miami Beach, Eric Poses, an inventor of board games, developed a product aptly named for the pandemic: The Worst-Case Scenario Card Game, a title that could also be applied to his experience relying on China to make and ship the product.

Before the pandemic, shipping a 40-foot container of games from Shanghai to the warehouse he uses in Michigan cost $6,000 to $7,000, Mr. Poses said. His next shipment, scheduled to leave China in mid-September, will cost at least $26,000. And his freight agent warned him that the price will most likely rise, to $35,000, because of rail and trucking difficulties in the United States.

Cheap and reliable sea transport has long been a foundational part of international trade, allowing manufacturers to shift production far and wide in search of low-wage labor and cheap materials.

Columbia Sportswear has typified the trend, expanding from its base in Portland, Ore., to become a global outdoor gear brand. The company has relied on factories in Asia to make its goods and taken the ocean cargo network for granted.

“It’s sort of like, every day when you get up in the morning, you turn on the lights and the lights always work,” said Timothy Boyle, Columbia’s chief executive.

But the price of moving goods to the United States from Asia is up as much as tenfold since the beginning of the pandemic, and Columbia might have to reconsider its traditional mode.

“It’s a question of how long this lasts,” Mr. Boyle said. 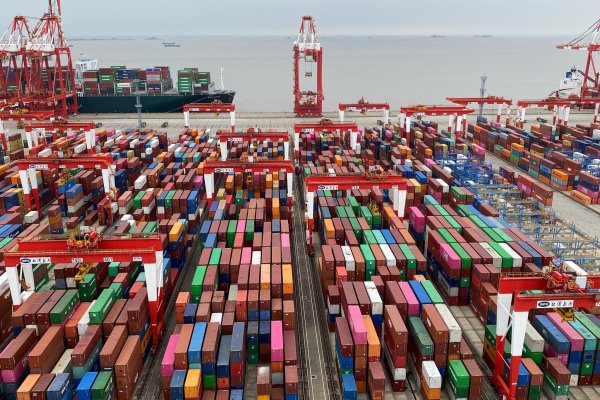 Some trade experts suggest that product shortages are now being exacerbated by rational reactions to recent events. Because of the pandemic, humanity now knows the fear of running out of toilet paper. That experience may be driving consumers and businesses to order more and earlier than previously needed.

Ordinarily, the peak demand for trans-Pacific shipping begins in late summer and ends in the winter, after holiday season products are stocked. But last winter, the peak season never ended, and now it has merged with the rush for this holiday season — reinforcing the pressure on factories, warehouses, ships and trucks.

“We have this vicious cycle of all the natural human instincts responding, and making the problem worse,” said Willy C. Shih, an international trade expert at Harvard Business School. “I don’t see it getting better until next year.”

A version of this article appears in print on Aug. 31, 2021, Section B, Page 1 of the New York edition with the headline: Supply Chain Still Tangled, And No Sign Of Clearing.