Supply-chain complications are giving the industry and buyers fits.

By Emily Badger
Photographs by Andri Tambunan
As seen in The New York Times Feb. 15, 2022

A single house under construction in America today faces all kinds of problems, starting with a run on lumber, then bricklayers in demand, subcontractors with Covid, appliances on back order and plumbing fixtures out at sea. Get through all of that, and then comes one more hitch with what should be a straightforward finishing touch.

“Garage doors are a nightmare,” said Rick Palacios Jr., the director of research at John Burns Real Estate Consulting. If you had to rank the headaches homebuilders face, he said, “garage doors are the worst right now.”

The home-building industry is having the most difficult time in decades meeting demand, the sum of many pandemic complications. But this moment reaches peak absurdity with garage doors.

Few people had a problem getting them before. Now everyone seems to have that problem. Prices have doubled or tripled in the last year. Lead times have stretched from weeks to months. Homebuilders who would once order garage doors several weeks before finishing a house are now ordering them before the foundation is poured.

“It used to take us 20 weeks to build a house,” said Adrian Foley, the president and C.E.O. of the Brookfield Properties development group, which develops thousands of single-family homes annually in North America. “And now it takes us 20 weeks to get a set of garage doors.”

Many frustrations that builders face today aren’t entirely novel. Tariffs and natural disasters have rattled supply chains before. Skilled labor has been an issue for years. Zoning rules have long stymied construction. Rather, what is unique, with an American twist, is a problem like this: Homebuilders are struggling to complete new homes amid a housing shortage because they must first complete the thing designed to house our cars.

In most parts of the country, a builder can’t pass final inspection for a home that is otherwise perfectly complete — but that is missing its garage door. That means builders don’t get paid and home buyers can’t move in.

Delays are also contributing to the slow pace of home building. Before the pandemic, a typical single-family home might have taken seven months to construct. Today it can take up to a year.

Nine in 10 new single-family homes in America were built with a garage in 2020, and they’re nearly universal in the Midwest and on the West Coast. So just about every new house needs a garage door.

“If anything, the pandemic has even furthered that” demand, said Jeff Schroeder, a senior vice president for Ponderosa Homes in California. As home prices have soared during the pandemic, families in places like the Bay Area are pushed toward cheaper housing farther into the exurbs. “To do that,” Mr. Schroeder said, “they need a car.”

These last two years, the garage has also become the answer to all kinds of pandemic problems. It’s the remote office, the home gym, the one-room schoolhouse and the makeshift bedroom for doubled-up family. The pandemic has effectively completed the decades-long evolution of the garage from a detached carriage house to a connected car annex to a space inseparable from the home itself.

Along the way, the garage door became, for many, the real front door. And so it can be surreal to see brand-new homes with their garages sealed in plywood, or to hear homebuilders talk of installing temporary ones. Welcome to your dream home! The real garage door will be coming later.

Mr. Foley’s company has delayed closings rather than come up with temporary fixes.

“The garage door is aesthetically a part of the home’s finish,” he said. To deliver a home without one — “it’s akin to delivering a new car without a front grille.”

In Sacramento, the national homebuilder Lennar asked the city’s building department for a reprieve from garage door requirements.

“This is probably the first time I’ve ever been involved with a supply-chain issue,” said Winfred DeLeon, Sacramento’s chief building official. The department came up with a provisional agreement — to be signed by the bank and the home buyer — allowing a home to be occupied with painted plywood sealing the garage.

The issue for the final inspection isn’t the door itself. Rather, inspectors test the mechanism required by federal law to automatically halt the doors in case anything, or anyone, gets stuck underneath.

The safety mechanism inside a garage door is one small part of a complex product — or, more important, a product with a complex supply chain. According to an index created by John Burns Real Estate Consulting, garage doors have a more complex supply chain than windows, HVAC systems and plumbing fixtures. They present more possibilities for something to go awry than just about everything other than appliances and lighting fixtures.

That index was developed early in the pandemic. Then Todd Tomalak, who leads the John Burns building products group, put an addition on his Green Bay, Wis., house with a new master suite and a roomier garage for his woodworking tools. It was “100 percent done, done, done” in early December, save for two things — the bathtub and the garage door.

“The irony is just too much,” Mr. Tomalak said.

Yes, the guy who tries to forecast supply-chain problems with garage doors can’t get a garage door either.

Take apart one of these doors and it has a couple of hundred individual subcomponents: panels, tracks, brackets, hinges, springs. The models come in all kinds, too: garage doors to make your home look like a fortress, a barn, a carriage house, a Renzo Piano museum.

To understand the industry’s manufacturing, consider an airplane, said Dave Monsour, a longtime engineer who is now the technical director of the Door and Access Systems Manufacturers Association. An airplane has thousands of parts. But every time manufacturers build another one, they use essentially the same parts as in the last airplane. No one’s customizing the exterior material or the width of the wing.

“With our business — garage doors — it just explodes,” Mr. Monsour said of the variety. “You can get any size you want, any color you want, any wind-load rating you want.”

Garage doors come measured not in one- or two-car sizes, but in three- or six-inch increments. Want windows? How about insulation? The answers affect just how much it weighs. And now you need a different spring to counterbalance it.

Amid all this variety, a few problems have been acute lately. Many doors contain spray-foam insulation, which has been in short supply since the plants in Texas that manufacture its chemical components were disrupted in last year’s winter freeze. (If you make garage doors, you’re also competing for polyurethane or polyvinyl chloride with window frames, vinyl siding, caulking — and the aerospace, cruise ship and automotive industries.)

Many other garage door components are made from steel, which has also been in short supply. And even companies that manufacture the finished doors domestically typically source parts from China that have been snarled in global shipping.

In the Raleigh-Durham area, Wes Carroll’s custom home building company, Upright Builders, primarily constructs homes with three-car garages, split into a two-car side entry and one-car front entry. (“We build as few houses as possible with only a two-car garage, if that doesn’t sound crazy,” he said; local buyers expect three, especially on pricier homes.)

For that setup, he used to pay about $3,200. Now the cost is running about $6,000. He has one week to lock in the price. Then he’s waiting two to three months for delivery.

The unpredictability of rising costs and long lead times, the problem at the heart of home building today, has upended his business model. It used to be that you’d presell a home and then start construction, because home building is less risky when you know there’s a buyer. But all the risk is reversed right now.

“The way I’m putting it — and garage doors would fall into this category — we don’t know something is not going to be available until it’s not available,” he said.

And the latest word on the availability of Mr. Tomalak’s garage door, ordered on July 27 of last year?

An earlier version of a caption in this article misstated the material used to board up a garage. It’s oriented strand board, not plywood.

Emily Badger writes about cities and urban policy for The Upshot from the Washington bureau. She's particularly interested in housing, transportation and inequality — and how they’re all connected. She joined The Times in 2016 from The Washington Post. @emilymbadger

A version of this article appears in print on , Section B, Page 1 of the New York edition with the headline: Oh, You Want a Garage Door? 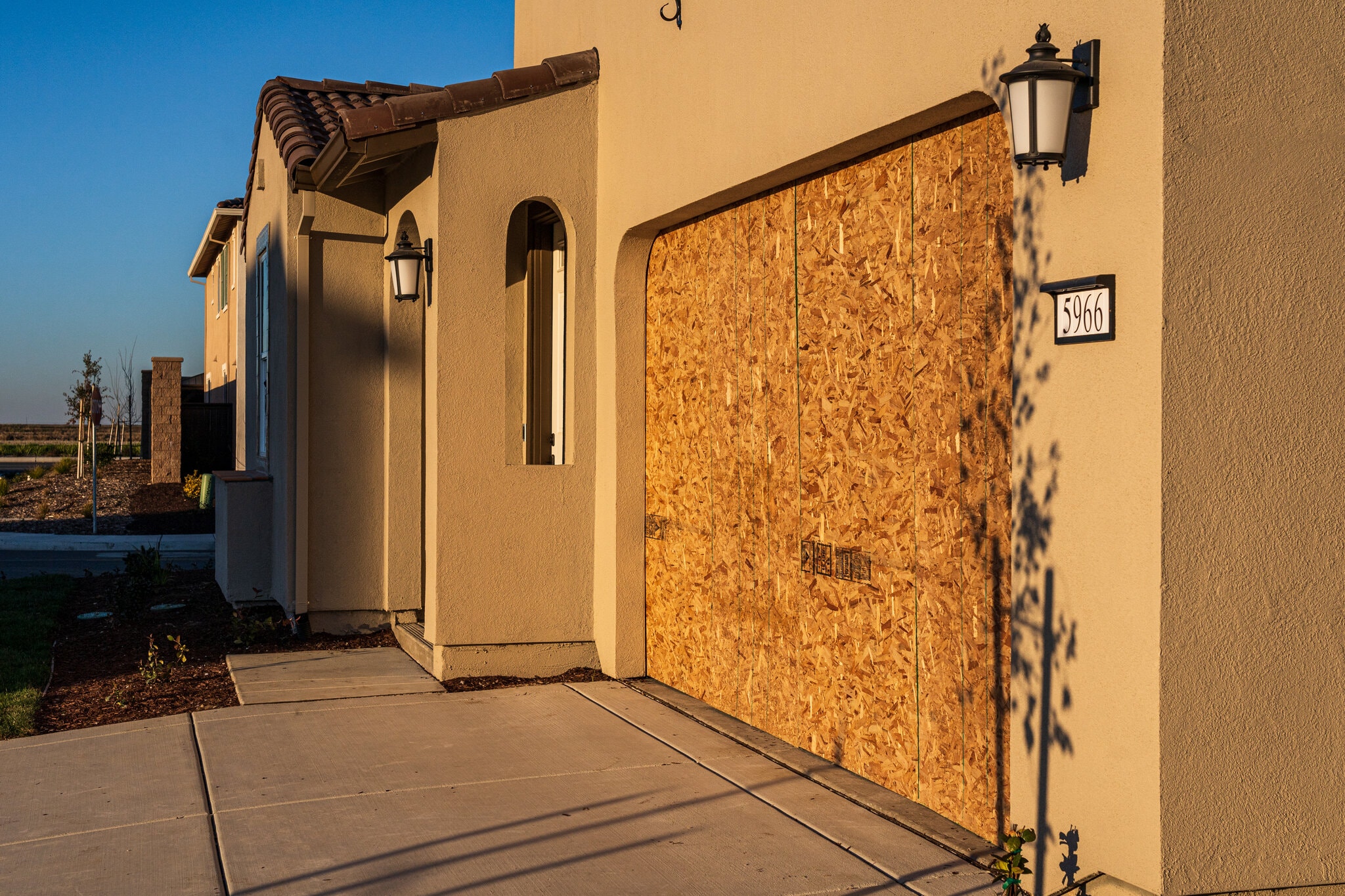 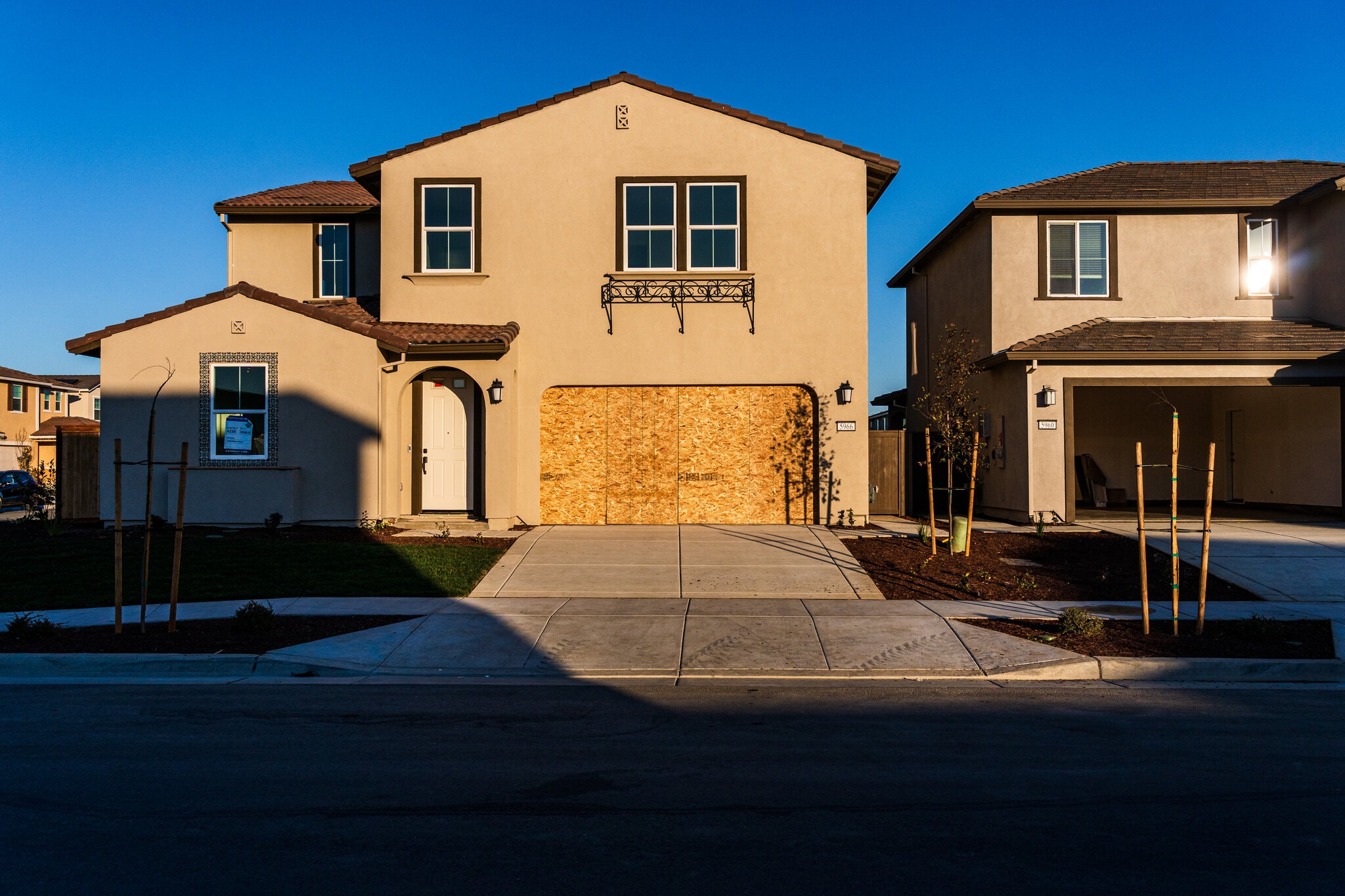 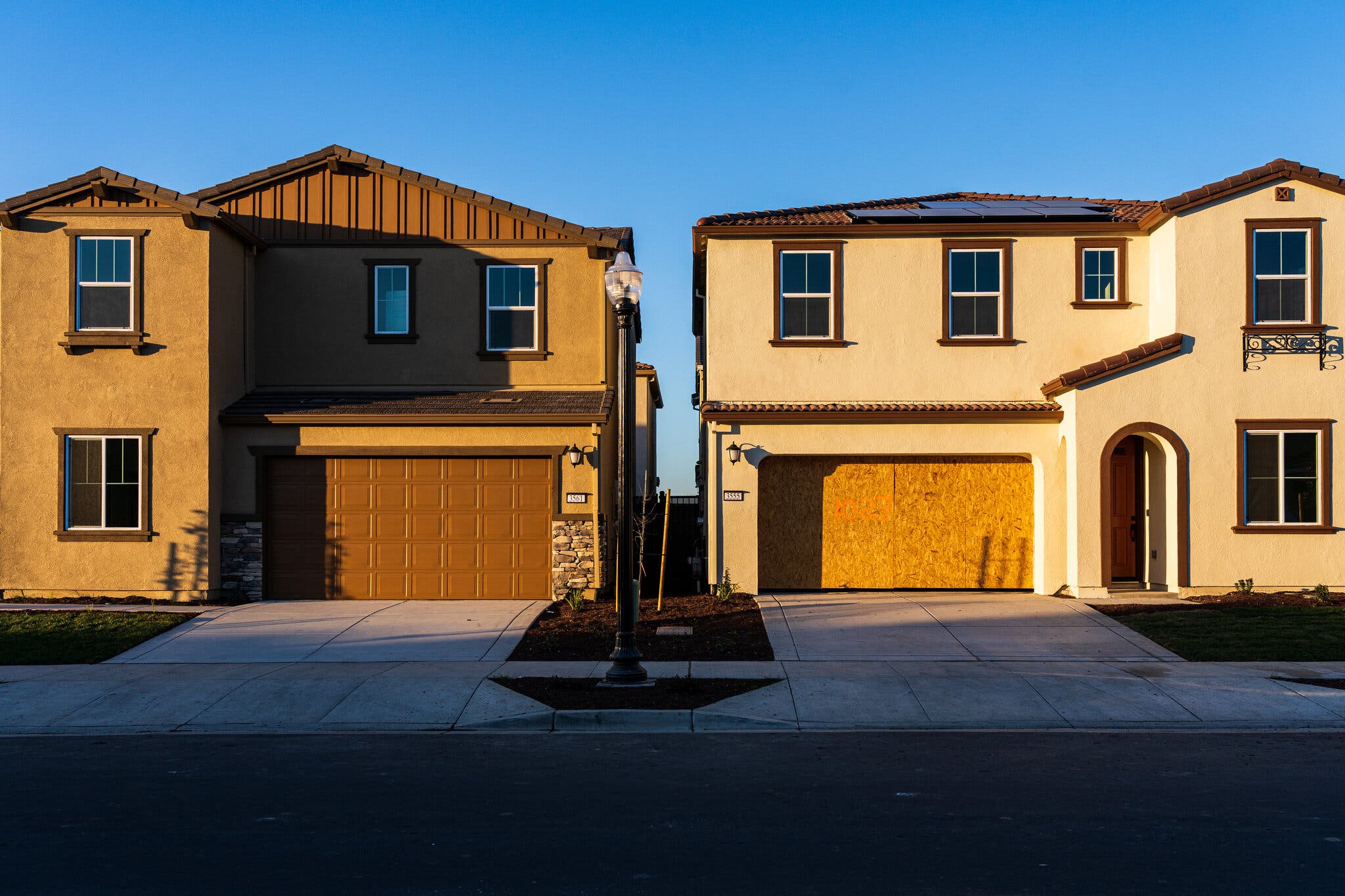 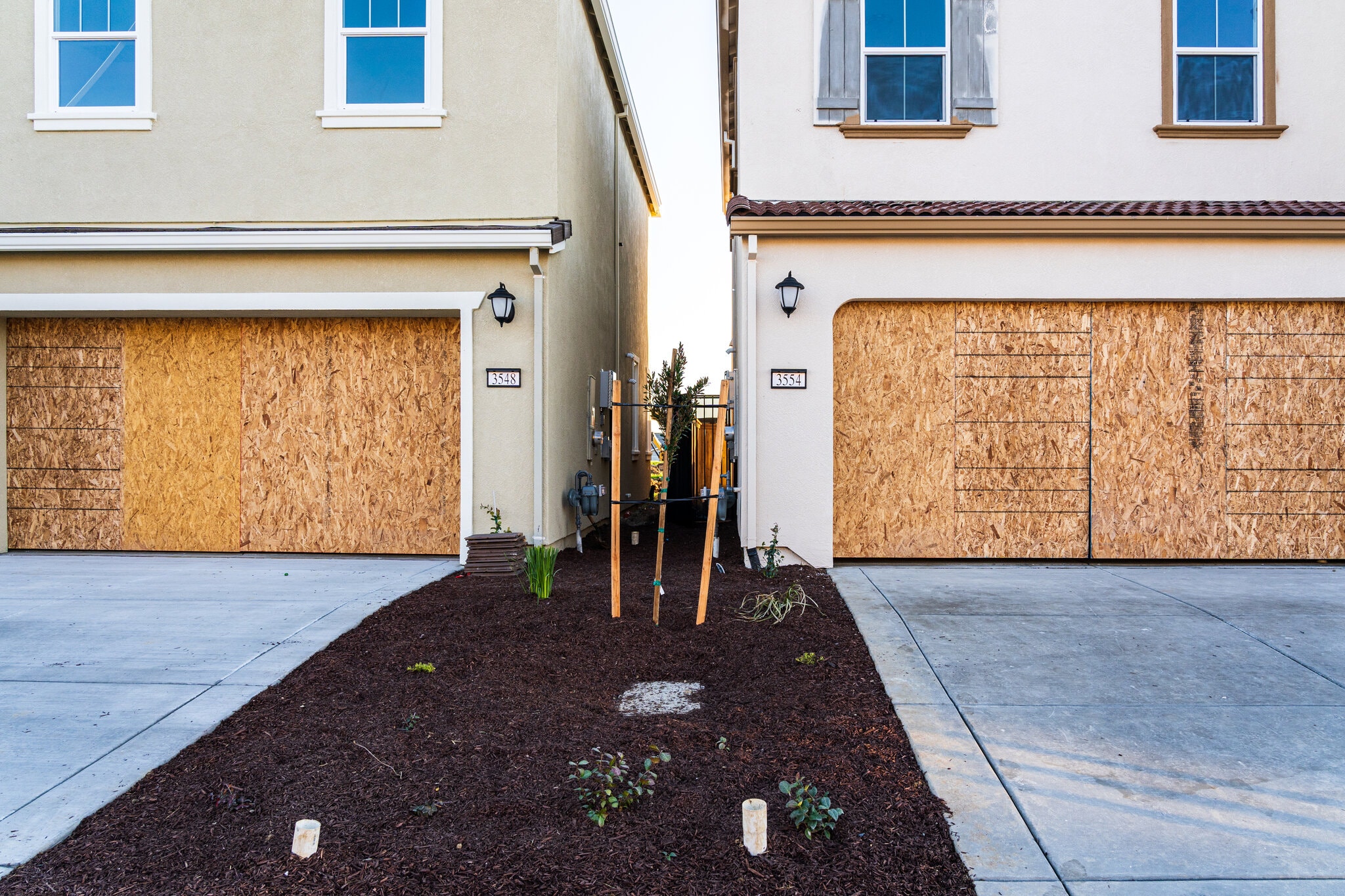